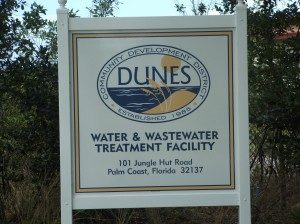 The Utility Division is comprised of potable and irrigation water treatment and supply systems as well as a wastewater collection and treatment system.  The combined utilities represent a capital investment of well over $50,000,000.00.

The DCDD owns and maintains all of the raw water wells, reverse osmosis treatment system, distribution piping, fire hydrants, valves, and meters in the potable system.  Equally as important as supplying drinking water, the potable system also provides fire protection throughout the DCDD.  In 2004, the DCDD decided to develop its own potable water supply and treatment capabilities independent from the City of Palm Coast which was then supplying our water.  This decision was based on continuing water pressure problems, increasing costs, and the strong likelihood that water supply would be used as a lever by Palm Coast to annex the DCDD.  Developer funds and a $2,800,000 grant from St. Johns River Water Management District (SJRWMD) covered the entire cost of the design and construction of the new water treatment plant.  This state of the art reverse osmosis facility treats raw water pumped to the distribution system.  Reverse Osmosis treatment provides some of the most advanced treatment of potable water in the industry.  This treatment supplies our community with some of the finest potable water in the state.  In 2009, the DCDD instituted an overall rate reduction that makes its utility rates among the lowest in the region.

If you have questions regarding the purity of our water, the annual water quality reports can be found here.

The irrigation distribution system is similar to that of the potable water system except in the commodity it distributes and the color of the components.  Because irrigation water is reclaimed from treatment plant effluent and untreated well water, it cannot be mixed or cross-connected with the potable supply.  This is the reason for two separate distribution systems.  The DEP also requires the use of purple colored pipe, meters and hydrants to distinguish a reclaimed irrigation system.  In 1993 ITT, in conjunction with Palm Coast Utility, developed and implemented the reclaimed irrigation system for the DCDD.  Interlocal Agreements with the City of Palm Coast to provide treated effluent and the addition of raw water wells to supplement the irrigation water supply should provide the DCDD with adequate irrigation water for the foreseeable future.

-You see an overflow from a manhole or uncovered manhole.

-You hear an alarm or see a flashing light at a pump station.

-You see water coming from the ground or any unexplained water flow.

-You see bridge or toll plaza lights out at night or damaged in any way.

-You see bridge traffic stalled or dangerous debris on the bridge.